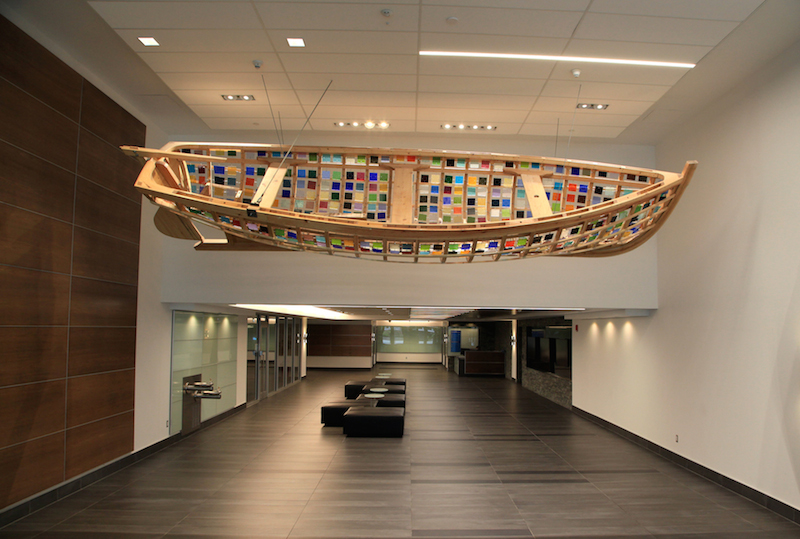 The opening of 351 Water Street in 2014 brought with it not just the first new office building in downtown St. John’s in more than 25 years, but also a first for the province’s arts community: a private-sector juried art competition. The winning entry, Black Island Punt, now hangs in the lobby of the East Port Properties building, serving as a reminder of our seafaring and boatbuilding heritage, and a testament to the importance of the arts in the province.

“I was attracted to the call for the commission because it was clear East Port Properties was open-minded, respectful of artists and deeply interested in having submissions from artists that work in all disciplines and materials,” Gill explains.

The theme for submissions was broad, with emphasis placed on celebrating and honouring the province’s spirit. In the end, Gill decided to submit a piece inspired by the punt, one of the province’s enduring cultural icons.

“I also like the idea of trying to show the inner spirit or life force in things. So several years ago I began to work with light in my work, whether it was emanating out from sculpture, or being reflected off its surface.”

This was the inspiration for his use of stained-glass tiles in the piece, which allow light to travel through the work from one side to the other.

“The goal was to create an effect that would be at once magical, wondrous and filled with life,” Gill says.

Gill worked with master boatbuilder Jerome Canning on the piece, which was inspired by the original Black Island Punt crafted by fisherman John Dorey in Notre Dame Bay in the 1950s.

The piece honours the tradition of boatbuilding in the province while using contemporary materials in the construction of the artwork.

“I know for both myself and Jerome, the opportunity to have work permanently in public view is something we are very grateful for and very proud of,” Gill says. “Visibility is always good.”

A plaque outlining the history of the boat design was recently installed near the work at 351 Water Street.

Gill says working with John Lindsay and Judy Wall of East Port Properties was “extraordinary in so many ways.” The information provided to the artists at the beginning of the process was thorough, Gill says, and he remains impressed by the level of professionalism and respect that was shown toward all of the artists who were part of the competition. In addition to making clear their genuine excitement about the competition, also clear was the promise that beyond technical limitations like size of the space and safety concerns, they wouldn’t interfere with the creative process – something which Gill says is “Music to an artist’s ears.”

Lindsay, Wall, and East Port have set a high standard for the success of future arts commissions in Newfoundland and Labrador.

“I have to say the whole commission process was flawless from start to finish,” Gill says. “It was the gold standard of how these kinds of competitions should be run.”

The opportunity to create Black Island Punt for 351 Water Street is an example of how private-sector opportunities and sponsorship can be beneficial to artists, Gill says.

“This project was a big boost to my career in a number of different ways. It was of course a much-needed financial boost, but it was also a morale boost to know that there are corporate supporters out there that are interested in supporting the arts for the arts’ sake.”

While this was the province’s first juried art competition from the private sector, Gill hopes it won’t be the last.

“This is the time for it,” he says. “The economy is still relatively strong, and I believe it’s a win-win situation for the artists, the corporations and the public.”