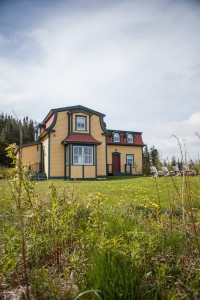 Our strong artistic and cultural history is part of what brings visitors to this province. Perhaps nobody knows this better than the folks at Fishers’ Loft Inn, a hotel and conference space located in Port Rexton.

Fishers’ Loft Inn is a collection of structures including rooms and suites, dining facilities, and conference and meeting space, all designed to reflect the traditional turn-of-the-century architecture of Trinity Bay in a comfortable luxury setting. Outside the inn, visitors can enjoy beautiful surroundings that include coastline, hiking trails, golf courses, historic sites and whale watching. Inside Fishers’ Loft, they can take in an impressive collection of some of the province’s best artists.

Exposing visitors to the talent and intelligence of the province’s people is part of the motivation behind Fishers’ Loft’s arts involvement, says John Fisher, who co-owns the inn with his wife Peggy Fisher. “In a small way, it’s to push back against the vein of mainland pejorative humour that has been directed at Newfoundland and Newfoundlanders for years,” he says.

That exposure, in part, comes in the form of some 270 paintings and photographs reflecting Newfoundland’s diversity, which are displayed in the rooms and public spaces of the inn. Most of what is displayed is also for sale, Fisher says, and the artists receive 100 per cent of the proceeds. “This is only fair because the inn benefits hugely from original art hung on every wall,” he says. “Visitors believe they are staying at an art gallery!”

Once a year that is, in fact, the case, since their conference centre is also the site of an annual art exhibit. This year’s exhibit is Stephen Zeifman’s “Cliffside,” an installation featuring the artist’s paintings, assemblages and photographs. The show runs at the Fishers’ Loft Inn’s conference centre until October 31. Next year, the exhibit will involve the Wooden Boat Museum.

Their commitment to culture infuses even the branding for Fishers’ Loft. “Culture is all about the distinctive aspects of place,” Fisher says. “As we like to say, people don’t leave Mississauga to visit Mississauga. Generic commodification of experience is not sustainable. In short, it’s a threat to the viability of a tourism business.”

The tourism industry is an increasingly important one for Newfoundland and Labrador, worth a billion dollars annually to the economy as of 2011. And it’s not just visitors to the island who contribute. According to the provincial government, residents represent about 58 per cent of total tourism expenditures and spending each year, which means that a destination like Fishers’ Loft Inn holds appeal for both visitors from away and residents who want to see a new part of Newfoundland. 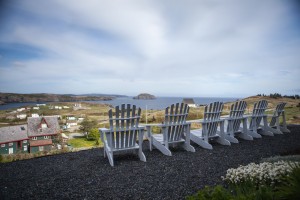 In addition to being a key part of their business philosophy, Fisher says the arts also give them a competitive advantage. “The arts provide us with a high profile in Newfoundland and elsewhere in the world. The arts are why our business is successful.”

While Newfoundland and Labrador’s rich history is part of the reason why people want to visit the province, and why residents want to see more of it for themselves, it’s only one piece of our story. Fisher says the arts also give tourists another view of the province and a taste of what is to come.

“Art is a way to talk about contemporary Newfoundland and the promise of our future.”