If you’ve passed by the St. John’s Arts and Culture Centre recently, you may have noticed dozens of spring blossoms gracing the grounds. But these are no ordinary flowers. The steel forget-me-nots (a symbol of the Royal Newfoundland Regiment) stand strong, proud and tall, neither bending nor breaking – a resolute reminder of those brave Newfoundlanders and Labradorians who have made the ultimate sacrifice.

Designed by Newfoundland artist Jim Maunder, Opera on the Avalon’s Garden of Tears is an art installation that will eventually consist of over 1,500 forget-me-nots – one for each Newfoundlander and Labradorian killed during the First World War. Proceeds from the sale of the forget-me-nots will go to support the Beaumont-Hamel opera “Ours,” which premieres July 1, while a portion will go towards the Royal Canadian Legion’s Poppy Fund. Since June 1, from Monday to Thursday, the flowers have been “planted” in a series of evening ceremonies. The last flower will be installed on July 1 to mark the 100th anniversary of the Battle of Beaumont-Hamel.

“We’re an opera company, but we’re really focussed on civic impact and how we reach people outside of the concert doors,” says Cheryl Hickman, Artistic Director of Opera on the Avalon.

Hickman says the Garden of Tears is a true community project, with the ceremonies bringing together young and old, school groups, new Canadians, members of the arts and business communities, and everyone in between. 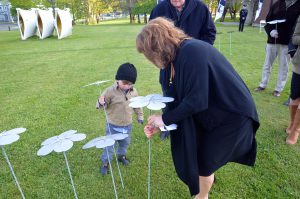 “Yesterday we were there and we had kids from eight to I think 12, singing the anthem in front of these flowers, which represents soul. And we can start the conversation with the next generation…they have a good idea now of why they’re commemorating Beaumont-Hamel,” she says.

“And the participation in it is, I think for us, what’s so important on every level.”

For business sponsors, Hickman says, the Garden of Tears offers the opportunity to partner with the arts and reach the community in a meaningful way. Considering the significance of the project, she says supporters were eager to jump aboard. Two of those are the presenting sponsors, Royal Bank of Canada and the Cahill Group, who donated $25,000 each.

“The history of Beaumont-Hamel is something that should not be forgotten, and thanks to the outstanding work of Opera on the Avalon, it won’t,” says Mike James, RBC’s Vice President, Commercial Financial Services, Newfoundland and Labrador.

“RBC is proud to help recognize this integral piece of Newfoundland and Labrador’s history, and Canada’s history, now and into the future.”

Fred Cahill, President of the Cahill Group, says the installation is a powerful visual reminder of why July 1 is a solemn day of remembrance and reverence in the province.

“In addition to dedicating their 2016 festival season to commemorating the 100th anniversary of the Battle of Beaumont-Hamel, Opera on the Avalon has created a compelling visual representation of the stories and sacrifices of the First World War with their Forget-Me-Not Memorial Garden: Garden of Tears. Cahill is proud to support the artistic vision that is transforming public space into art, and creating a place for personal reflection on the significance of World War I to our province’s history.”

The forget-me-nots will ensure that those who lost their lives in battle will be remembered, always. And at the end of the day, says Hickman, that’s what it’s all about.

“When you look at it and you think, ‘What does that symbolize?’ well, it symbolizes a life. We were out yesterday in the freezing rain and the cold, and one of the kids who was there, nine or 10 years old, her mother was saying how cold it was. And she said, ‘Yes, but they fought in this, you know Mom,’” Hickman recalls.

“This was a generation that was capable of doing anything, and lost their lives. And we have to commemorate that.”