Just as art has the ability to shape thought and opinion and how we view the world, it can also transform the very space in which we live. Art can enliven, engage, entertain, inspire and help anchor us to our surroundings, creating a sense of peace and place.

As the owner and president of St. John’s-based Tract Consulting Inc., a firm that provides professional planning, civil engineering, design and landscape architectural services across the province, Neil Dawe knows a thing or two about the beauty and transformative power of art. Since 1998, the Tract team has been combining their experience and expertise to create spaces that are aesthetically pleasing and purposeful. Some of the projects in their portfolio include the Victoria Park revitalization and the Bannerman Park Loop in St. John’s, the Salmonid Interpretation Centre and Downtown Revitalization in Grand Falls-Windsor, and the Margaret Bowater Park redevelopment in Corner Brook, just to name a few.

“We think that every community in Newfoundland has something that makes it a little bit different than everywhere else. And we think if we celebrate that, we’ll differentiate places (and) make visiting places more interesting,” Dawe says.

Dawe has also worked on integrating the arts within landscape architecture by incorporating sculpture and visual arts, which not only provides opportunities for artists to create new works, but also gives communities the chance to interact with art. Some examples include Luben Boykov’s statue of a young student counting on her fingers at the Bishop Spencer College memorial near Rawlins Cross and Morgan McDonald’s sculpture “The Rower” at Quidi Vidi Lake (Dawe assisted with the site planning for each project while working with the Grand Concourse Authority). With Tract, Dawe also worked on the site planning for Jim Maunder’s “Celebration” sculpture, which commemorates the old St. John’s Memorial Stadium.

“We like to say that good landscape architecture combines art and science to integrate and create beauty. The landscape architect’s hands, with the support of an artist – a visual artist or any number of varied artists – always lends more power and it provides an opportunity to tell a story,” Dawe says.

An example of one such story is told through the sculpture at the Peter Barry Duff Memorial Park in Paradise (which honours Peter Duff, who died in 1984 at the age of 17) – another space which Dawe helped create while working with the Grand Concourse.

“One of the things that (Peter) did in his youth was he helped an injured eagle. And the sculpture depicts him releasing the eagle, and it’s a metaphor for him being released,” Dawe says.

By creating beauty, Dawe adds, “people are able to enjoy spaces much more, just to sit and contemplate.” He and his team enjoy adding artistic flair to their work, and incorporating aspects like curvilinear elements and interesting lighting. 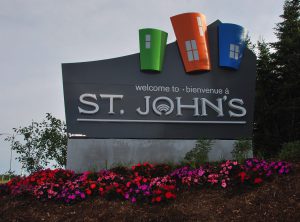 “The gateway signs that we did for the City of St. John’s, for example – it’s design, but there’s a little bit of art in it as well. It’s a contemporary reflection of old St. John’s that has really been taken up by the City as a motif that is uses on its strategic plans and on some of the literature to celebrate the city, or advertise or promote the city,” he says.

“We like to build and design in a contemporary way that’s reflective of our history, versus trying to always replicate the past.

Working with artists, Dawe says, helps bring their work to another level, citing the Captain James Cook Monument in Corner Brook as an example.

“Luben Boykov designed a monumental sculpture to Captain Cook. And working together, we built a space specific to that sculptural piece, and we actually left a rock in the design that Cook is standing on. It works quite well, but having the artist and the sculptor engaged is really critical to success. We’d love to see more of that take place,” Dawe says.

“At Tract, we always try to either reflect some art in the work we do, or we try as well – if you’ve got the budget – to build a park that’s reflective of the design ideas of the landscape architect and the architect, and the sculptor or the visual artist, whoever it might be,” he adds.

“We just love working with artists. We think it just brings a whole lot more power.”

“There’s an awful lot of good stuff going on in the province. But we’d love to see more art, and particularly, in the urban areas where we want people to come and see places that we think are special – but also to use art as a way to celebrate culture and place, and who we are and where we came from.”